This is the greatest ruined building in the world. La Sagrada Fam & 7; lia, also translated as "Holy Family Church", abbreviated as "Holy Family Church", can be called the building of God. As a Catholic church, it is one of the most important buildings in the twentieth century in the world and the only one that has not yet been completed and has been rated as a world cultural heritage. In 1881, St. Family Hall was designed and built by architect Francisco de Bilia, but soon after the construction began, the architect and the worship society disagreed and gave up. Duke Guell suggested that young Gaudi should take over the design and construction of St. Family Hall. Gaudi has been working on this church since 1883 and until his death in 1926. This is the most important and greatest work in his life. It is also the crystallization of his efforts and the symbol of honor. It has become the permanent honor of Barcelona. Standing in the doorway looking up at the Holy Family Hall, the overall design of the church is inspired by nature, such as caves, mountains, flowers, animals, etc. The whole church has no straight line and plane, but a combination of spiral, conical, hyperbolic, parabolic and other curves. Gaudi once said - "The straight line belongs to man, and the curve belongs to God. " It is hard to imagine that such a perfect design does not have a complete design draft and construction drawings, only a model built by Gaudi. When I came inside the church, I was shocked by the magnificent buildings in front of me. Entering the Hall of the Sacred Family is like entering a quiet forest, where sunlight shines down the leafy trees and illuminates the ladder leading to heaven. No straight line or plane can be seen in the church. None of the pillars are vertical. The towering pillars open oblique forks like tall trees. The hyperboloid arch represents the lush crown. Flowers are blooming on the crown. Gaudi's greatness is to use those natural structures to make his architecture stronger and stronger, and to make his works more magnificent. Before I entered the temple of Saint Family, I was puzzled why Gaudi, who was fascinated by color, used colorless gray stones instead of colorful colors when he built it. When the morning sunshine sprinkled through the stained glass windows and drew a rainbow of seven colors into the church, I finally realized that Gaudi had left the color to God and let the light of heaven smear the flowing color on this godly forest. In the two facades of the Saint Family Hall, there are two different warm and cold tones, blue-green and yellow-red. The blue-green tone of the birth facade symbolizes water, the first element of life. When the first ray of sunshine spreads here every day, it implies endless miracles. The yellow-red hue of the suffering facade symbolizes the sun. Standing in the center of the church, looking around the perfect light around the church, I feel that I am in a colorful fairy tale, which is so unreal. The gate has three parts which depict the birth and childhood of Jesus. From left to right, they represent "hope", "love" and "faith" respectively. Gaudi arranged the "Birth Gate" to the east of the church to greet the sunshine rising from the east every morning. It symbolized that the coming of Christ brought dawn and endless miracles to mankind. 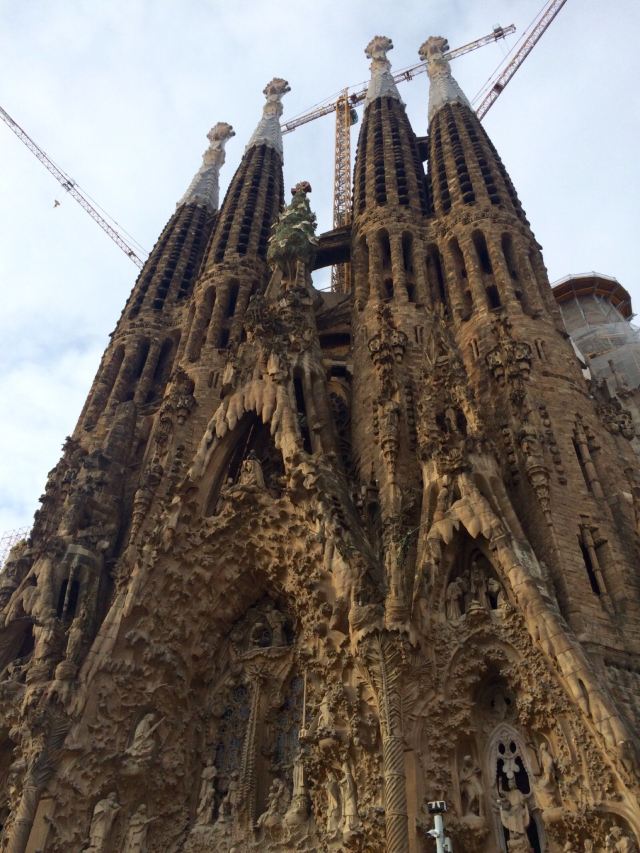 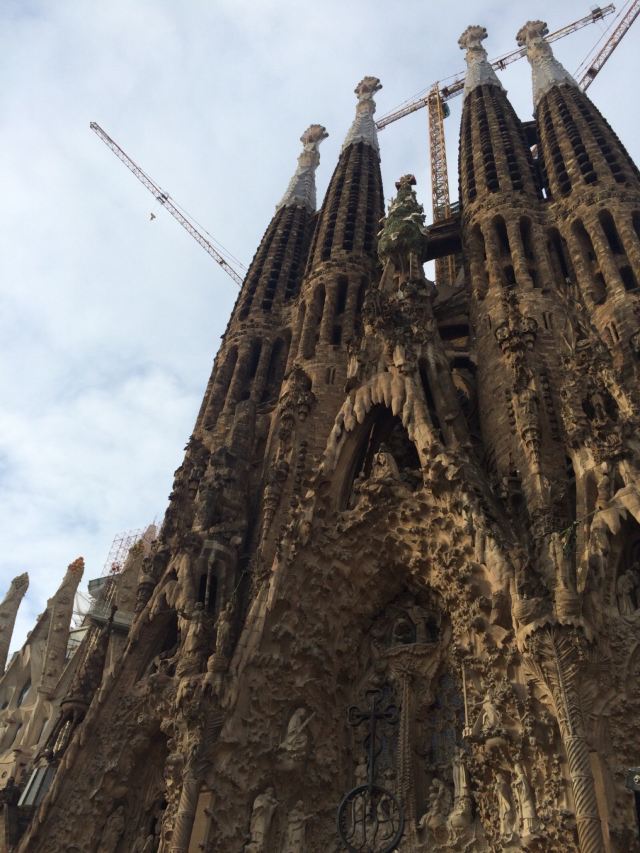 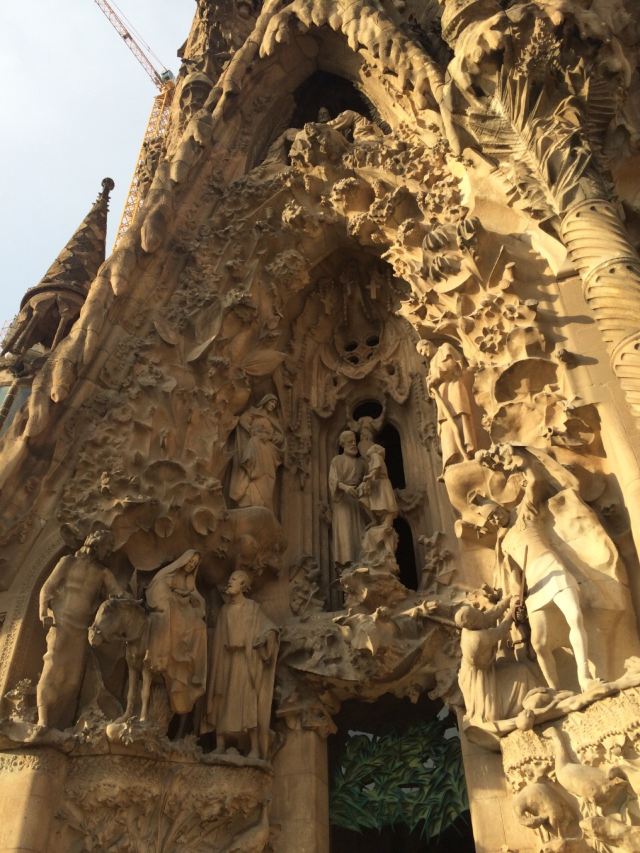 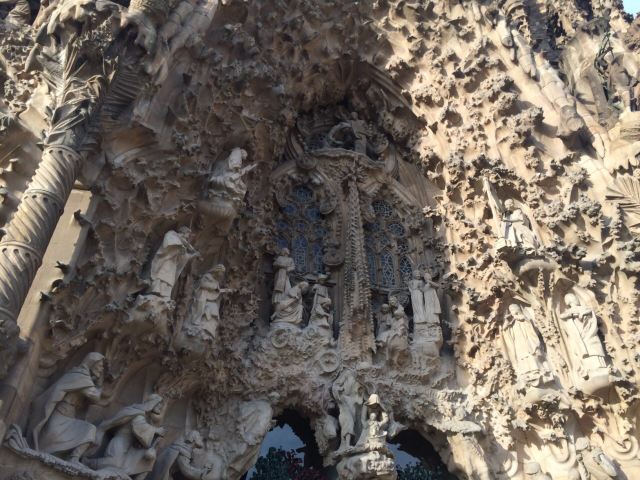 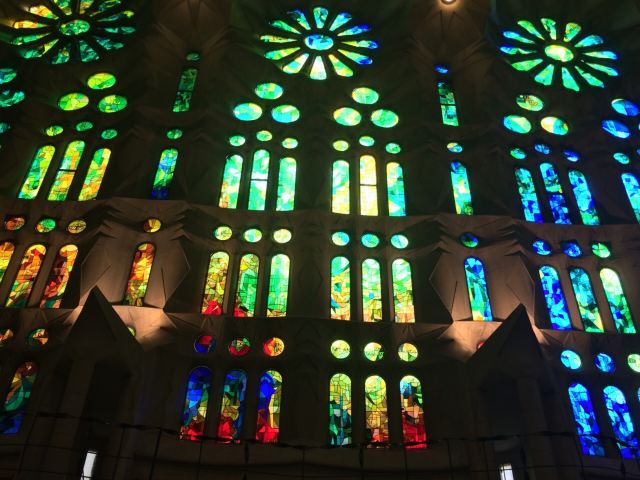 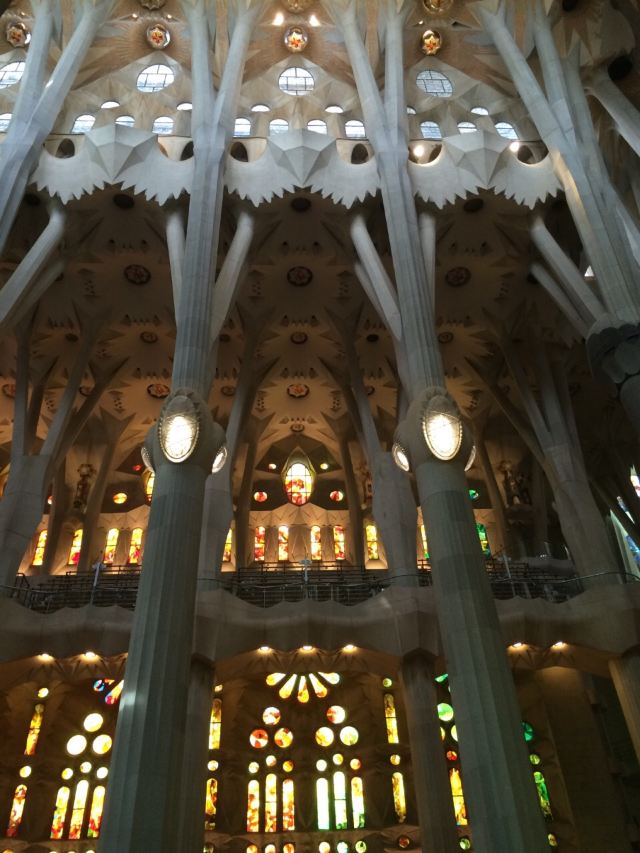 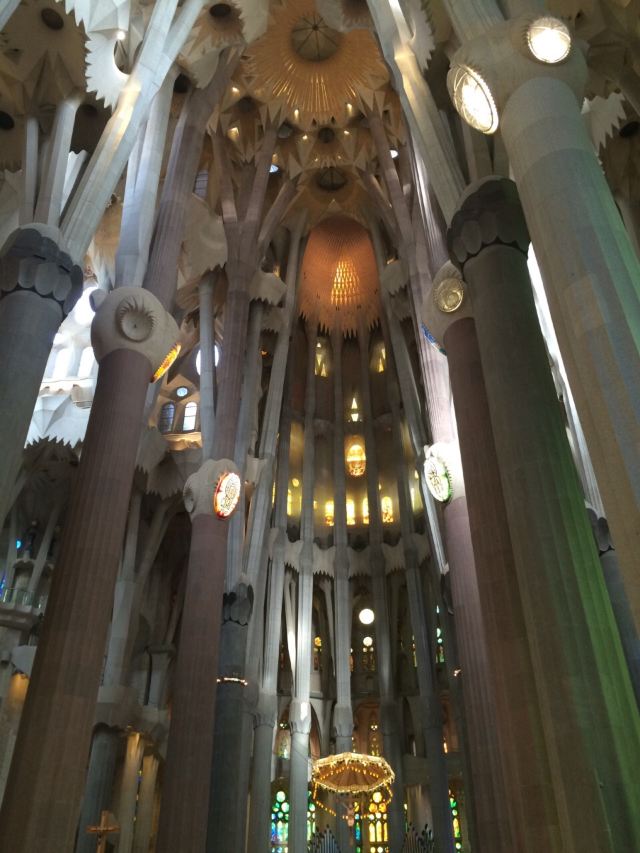 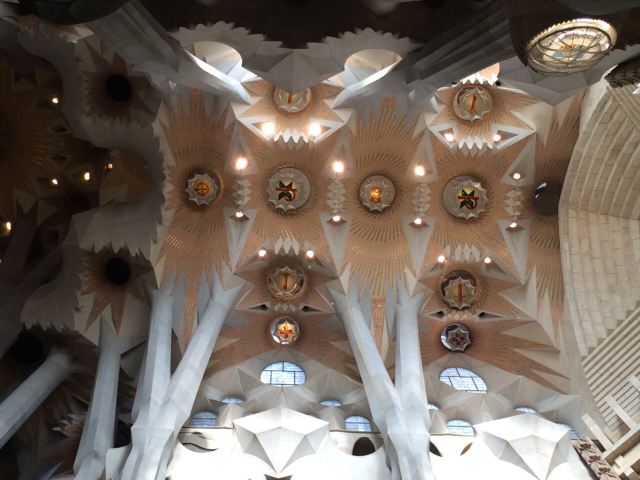 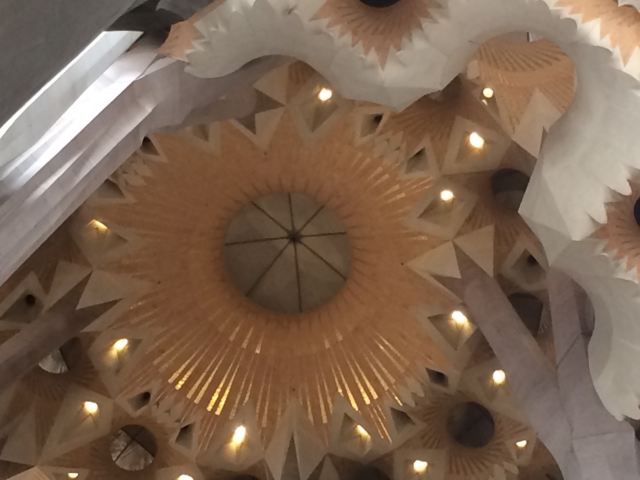 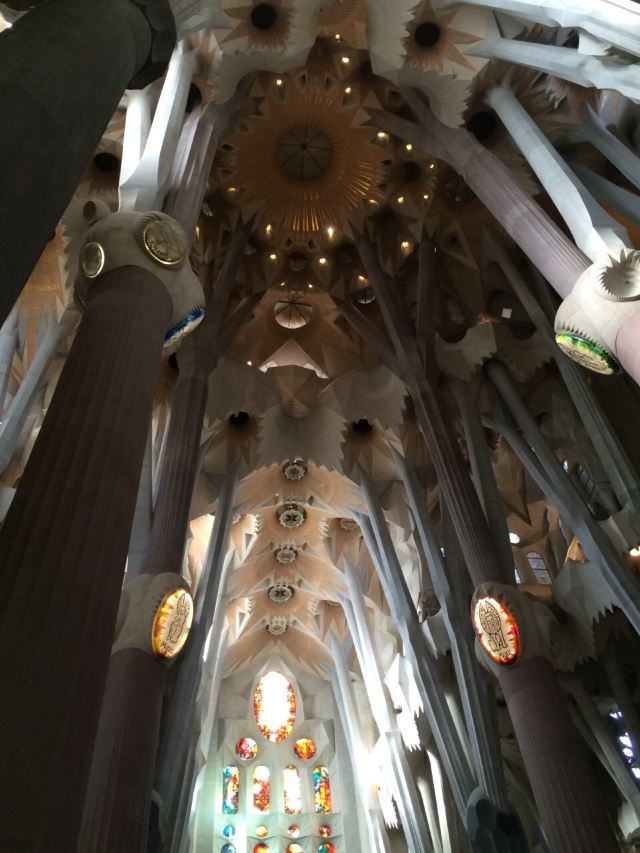 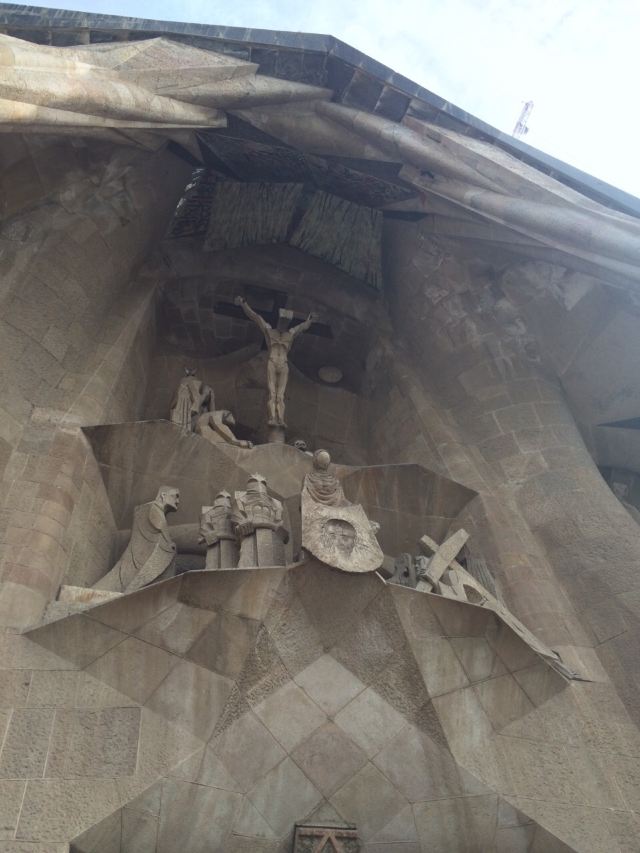 E30***57
E30***57
5/5
Reviewed on 22 Oct, 2019
0
5/5
Sagrada Familia絕對令人驚嘆。當你第一次走出地鐵並轉過頭來看它時，它絕對讓我喘不過氣來。細節和它的大小是令人難以置信的。我提前買了票，能夠在我的旅行前走動。我強烈推薦參加這次旅行，因為這裡有很多關於這座教堂的信息和歷史。人們說，參觀聖家堂的最佳時間是在日落期間......他們是對的。
_We***74
_We***74
5/5
Reviewed on 1 Sep, 2019
0
5/5
This was one of the most amazing constructions in Barcelona. It lives up to everything you imagine. Eventhough it was under reconstrution, you could still see the greatness of it all. It was by far my favorite. It is humongous and just looking at every detail leaves you in awe. The ticket was a bit expensive so I couldn’t go in but I bet it was more surprising from the inside.
小鱼同学
小鱼同学
5/5
Reviewed on 20 Aug, 2017
15
5/5
Saint Family Cathedral, after more than 100 years of construction, has not yet been completed. It is the only building in the world that has not yet been completed and is listed as a world heritage. Genius is genius. When Gaudi built the church, there were no drawings. So now the process of church restoration is slow. There are studios in it. The staff still need to model the church. The church is mainly three-sided, recording the birth, suffering and glory of Jesus, glory has not yet been built, can not be visited. Gaudi's church is not like the oppressive feeling of traditional European churches. When it comes in, it's colorful. Gaudi wants to give others the feeling of heaven. The Eastern sun rises in cold tones while the Western Sunset in warm tones. I don't want to go.
_GG***81
_GG***81
5/5
Reviewed on 10 Sep, 2019
1
5/5
Sagrada Familia was massive, aglessive and big! It seems to have long histories in there:) i was very imressed and glad to finally see in person! sad that it was undergoing atm... but you should go there when you visit to Barcelona one day xx
Show More