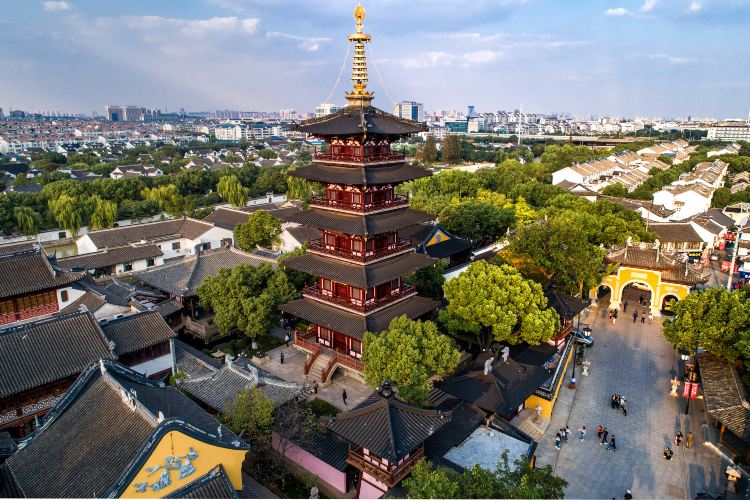 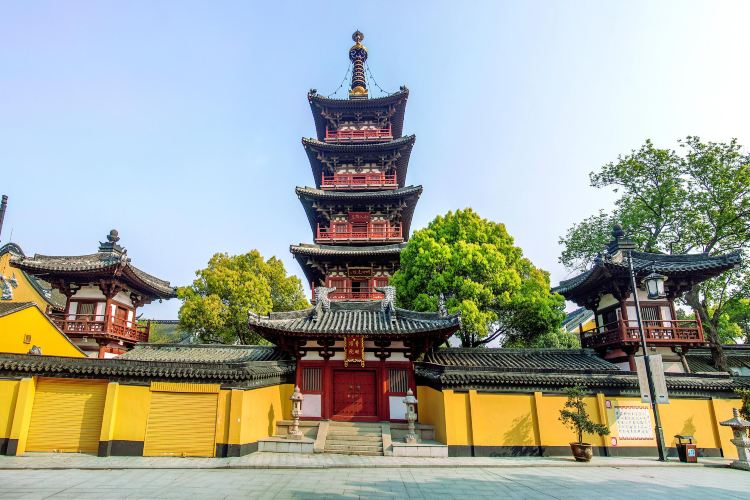 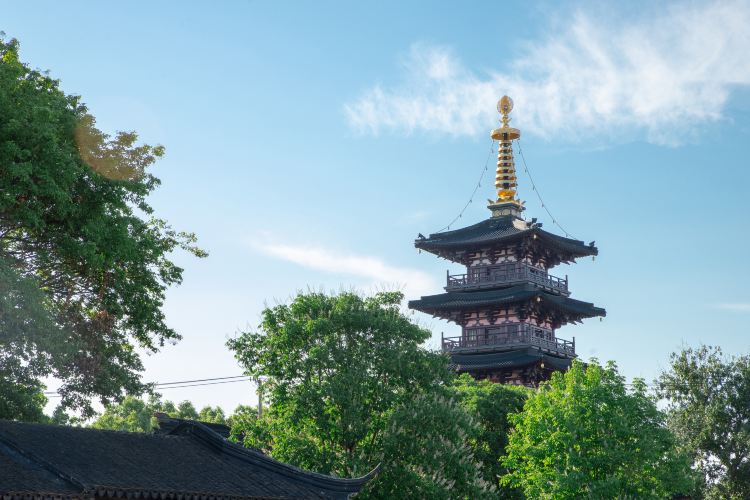 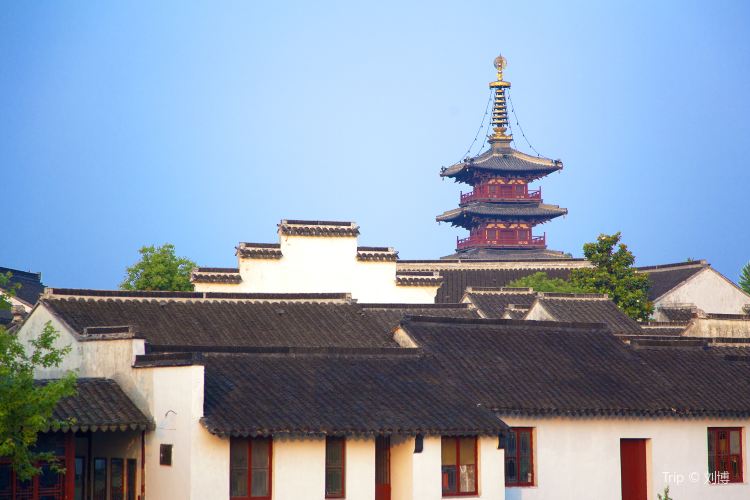 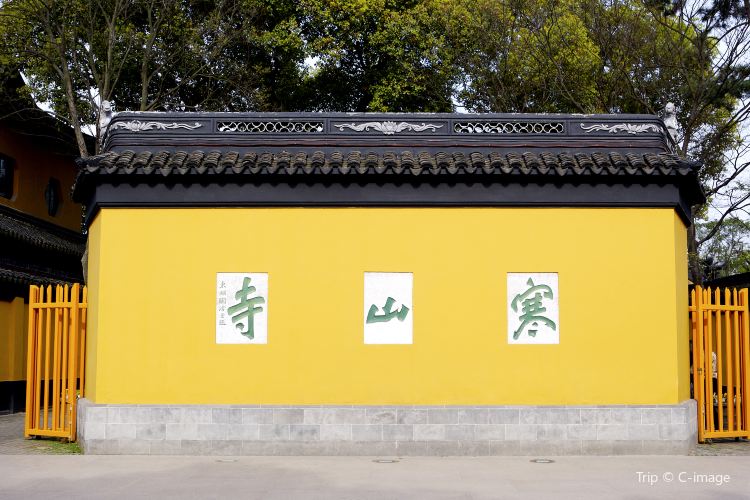 Serene and peaceful place, gets crowded after 9 in the morning and these days many buildings are under repair.Han shan si Nan is the bus stop you can get off and walk around 6oom to temple

Post
I think most people know that Hanshan Temple is the source of this poem: the moon falls in the sky and the fire is on the river. The Hanshan Temple outside Gusu City, the night and half bells to the passenger ship. This time I came to Gusu City, it was in the spring rain. When I went out in the morning, I needed to use a foreigner to wrap my body. The air is damp. There are very few people on the way to Hanshan Temple. There are still piles of winter without falling. Residual leaves. is in this misty encounter with Hanshan Temple, the river outside the temple quietly flowing through the stone bridge, the tall red candle exudes its light and heat. Probably because it is not a holiday, there are very few tourists in the temple, and we can take a leisurely stroll here. Come to the copy room in the temple, we have quietly copied a good luck in a quiet atmosphere due to sufficient time, and we are willing to be auspicious. I like this kind of participatory way of visiting, not perfunctory, not taking the plunge, and the impression here is even more profound. The ticket price of Hanshan Temple is 20 yuan, half price for students, the temple is relatively small, and you can walk around in 40 minutes. 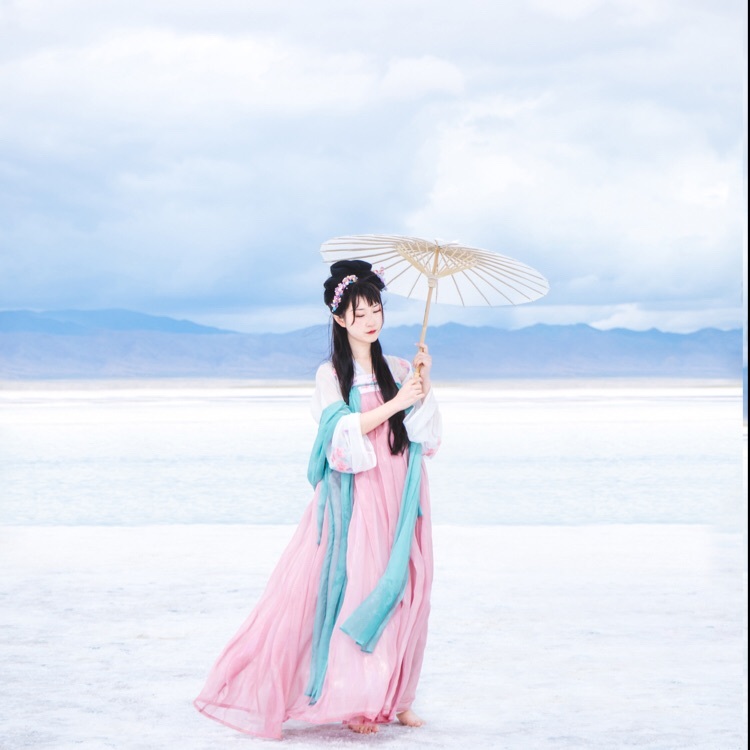 Xiao Lian
📍Hanshan Temple, Suzhou Hanshan Temple is also called “cold mountain temple”. It’s a Buddhist temple in Suzhou. This is one of my favorite temple. Even though I’m not a temple person, but I just like this temple. I like it because it’s just simple. Dominated by yellow and red. Not much decoration. It’s just simple and beautiful. I came here in December. It’s already cold enough and the leaves fell from the trees. The color of the leaves matched the temple (see my third pict). What a pretty combination #givethanks #givethanks 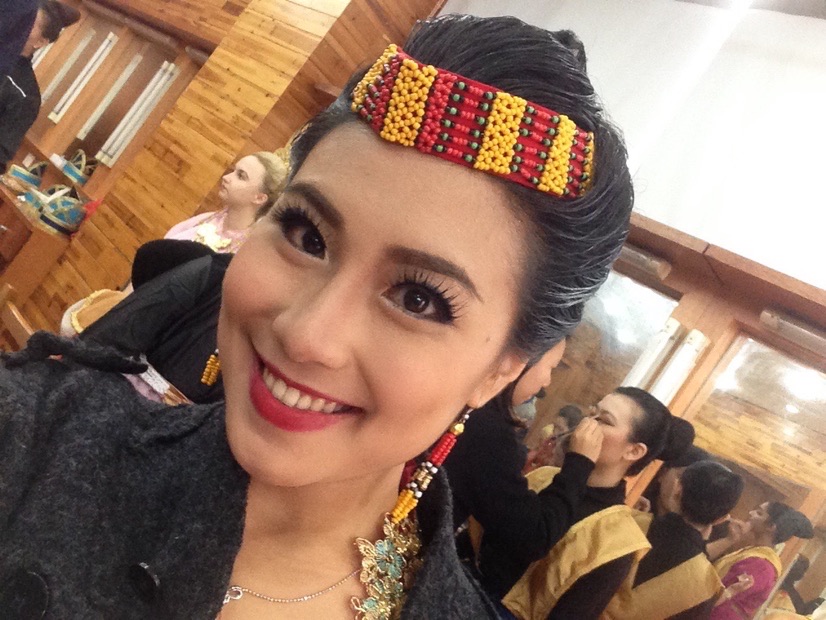 Irene Mikaela L T
Hanshan Temple outside Gusu City, this is the quiet life I want. There is such a place outside Suzhou City, Suzhou people like to run to this place every year. It is famous all over the country because of a "Maple Bridge Night Park". The temple is famous for poetry and poetry. It is the Hanshan Temple. Today's Hanshan Temple is a famous attraction for tourists coming to Suzhou Batu Card. It has also become a special reference for Chinese culture and has blended into our delicate and deep emotions. "The Hanshan Temple outside Gusu City, the night half bells to the passenger ship." - Zhang Ji "Fengqiao Night Park" Hanshan Temple can be said to be a fusion of multiculturalism, Taking Buddhism culture as the main body and harmony culture as the core. Because the Buddhist disciples here have always believed that the Tang Dynasty and the Shang Hanshan, who had once lived in the Hanshan Temple, were picked up by the two sorghums of the reincarnation of the two great Bodhisattvas of Manjusri and Puxian, and they were turned into the "harmony of the two gods" of our country. The symbol of harmony culture. The history and culture of Suzhou and Hangzhou, the beautiful scenery of Yunnan and the vastness of the northwest... Each city has its own color of life and unique experience, only to find the right gateway to the city. In order to appreciate the most fascinating look of the city. Today, I visited several masters, attended classes at Xiyuan Temple and Hanshan Temple, and drank tea at Wangshan Tea Garden in Wangshan, watching bamboo and twilight, and rewarding the moon and the river. I took a custom bookmark and a well-dressed picture, went to meet a friend I met online, listened to a song in his bar, and now live in a deep, alley in the bed and breakfast, writing, chatting, and feeling that life is good and gentle. 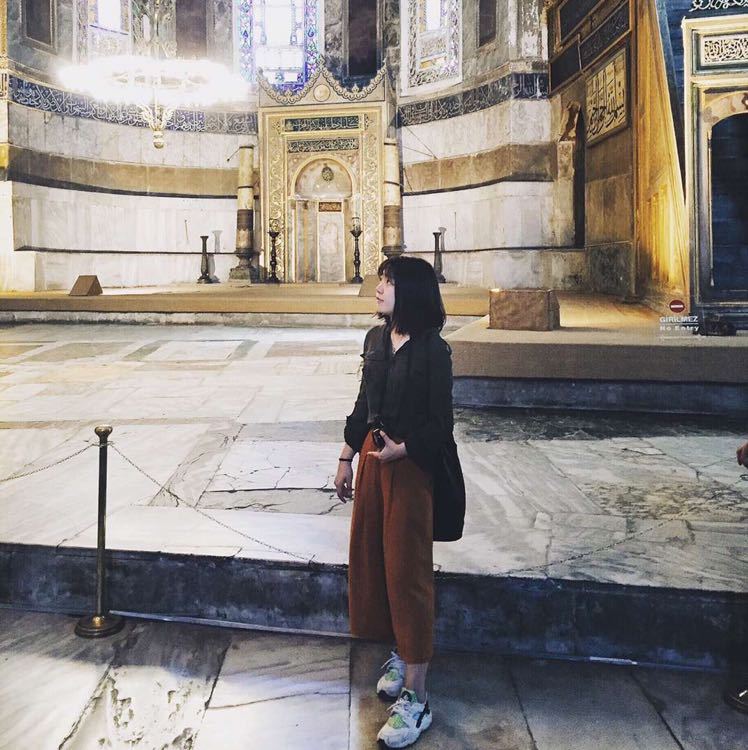 Tango
When you come to beautiful Suzhou, why not turn Suzhou around. Come to Suzhou's Hanshan Temple, located in the western suburbs of Suzhou City. It was built in the Southern Dynasties and has a history of more than 4,000 years. It belongs to the Linji Monastery in Zen Buddhism. There are many ancient monuments in the temple. There are stone inscriptions by Zhang Jishi, Hanshan, stone carvings, Wen Zhengming and Tang Yins inscriptions. Hanshan Temple is a famous blessing destination. Every year on December 31, Hanshan Temple will hold a bell-crossing ceremony and ring the bell 108. In the temple of , there is a poem monument written by the famous scholar Yu Yu in the late Qing Dynasty, as well as the high mountains, the stone statues and their legends. Deceive me, insult me, laugh at me, light me, yell at me, wicked me, lie to me, how to deal with it? Just bear him, let him, let him, avoid him, respect him, ignore him, after ten years, You look at him!"

Hanshan Temple is located in the western suburbs of Suzhou. The temple dates back more than 1,400 years. The temple gained renown from its mention in the famous poem “A Night Mooring by Maple Bridge” by the poet Zhang Ji of the Tang Dynasty: “From the monastery on Cold Mountain, the sound of the bell reaches the guest boat at midnight.” Hanshan Temple is a famous site to pay. Every day, a steady stream of believers comes to the temple to strike the bell, light incense, and pray for the future.
Show More